Dear Google, why do you want me to hate you?

I am a patient man. More than 10 years in the television industry made me so, and the last 8 in the Internet marketing one reinforced that facet of my character.

But sometimes something happen that really piss me off, and then I get infuriated and I am lucky I work at home, if not I would be really hard to stand for my co-workers.

Today it happened that something and it is your fault, Google.

I was working when in my Twitter stream I saw a curious tweet by Ani Lopez, a great Spanish SEO living and working in Vancouver. His tweet was referring to a strange Adwords Ad by Google promoting Adwords itself. The ad says this (translation is mine): “Forget about SEO. To be visible in Google today, try Adwords”.

The ad is published when you search “SEO” in Google.es 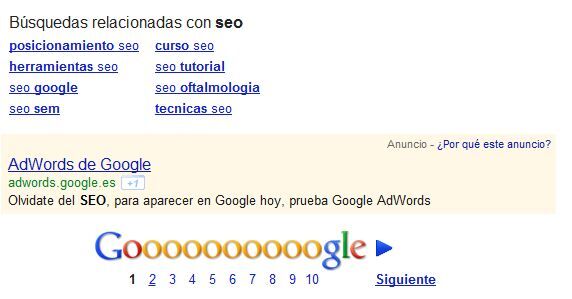 I am used to see Google advertising its products via Google. A classic is the ad that is published when you do a site search and which is promoting the use of Google Webmaster Tools. That is a consistent ad, related somehow to the search done; therefore acceptable. But this one? I don’t think so, dear Google.

The Search is about SEO, search engine optimization, organic search results… what ever you mean with the word SEO, but it is not about PPC.

If I am not wrong, one of the Adwords Guidelines is to not publish misleading ads, and I believe that your ad is misleading. If someone is searching for SEO, he is probably looking for informations about what does SEO means, what companies do SEO in Spain (being the search done in Google.es) or if there are Guides about SEO.

And this is not just the only ad. If I search for “Posicionamiento Web” or “Posicionamiento en buscadores (which are the same as saying “Search Engine Optimization” in Spanish”), and you will see Adwords promoting itself again with an ad saying this:

Your site in the SERPs – Receive the help of an Expert and put your site in Google. Call us!

I mean… someone is looking for information about SEO and you, Google, are saying to him to call you in order to have his site in the SERPs? If it was me promoting myself under SEO and finally selling Adwords, I would be considered a con-man (or directly a shit man).

But the most incredible ad is this one I see in Google.it doing a search with “SEO” (again, translation is mine).

SEO with Google – www.google.it/adwords – Put your TV and Print Campaign side by side with your Adwords Campaigns!

I searched for SEO and your ad:

Isn’t that a monumental cheating?
If Adwords is doing that, how can you blame that there are so called SEOs cheating their clients selling SEO services that are not so? You are their best example!

It seems that the “bus meeting” between Matt Cutts and his colleague finally gave results. In fact, right now both the ad “Forget SEO…” in Google.es and “SEO with Google…” in Google.it do not show anymore. Yes, Google is still promoting AdWords when people search “SEO”, but the copy of ads cannot be considered anymore misleading or against the SEO discipline, and – honestly – I believe that the ads now showing up can be accepted. I will be checking if things won’t come back as before, but I am confident enough that Google won’t make again such a silliness.