Reason number 5445131 why some SEOs destroy the reputation of SEO

Or the fascinating story of a counterfeited press release, which generated countless high authority links by deceiving government websites.

I don’t usually write publicly about black hat cases, also because I am of the idea that SEO is not a matter of black and white but, rather, of a large scale of gray, where some are closer to white and others closer to black.

Furthermore, if we talk about link building, we all know that shades of gray multiply even more, and otherwise throw the first stone who has never bought a link even if in doing so they called it Digital PR.

Yet, this time I cannot avoid it, because the involuntary collaborators have been many websites of small Italian municipalities, and this means that sites that belong to all citizens have been deceived and served to help certain sites to obtain organic visibility, they don’t deserve. 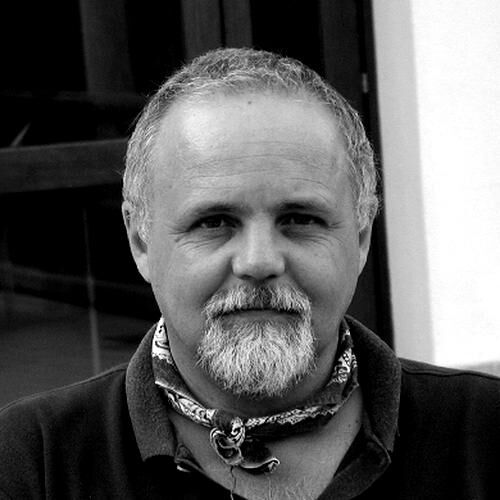 The person you see here above in the photo is Piersante Paneghel, one of the fathers of Italian SEO, and he told me the story I am about to describe to you a couple of weeks ago.

So, my role here is sole as a storyteller and the credit for discovering this case of extreme link-building manipulation is all his own.

Piersante described it to me as a comedy in 6 acts; therefore, I will use that structure in this post.

Act One: a line makes me raise an eyebrow

Piersante was examining the link profiles of a set of industry sites. It is a classic routine activity, which is used to see if someone has had any good ideas, or if they are playing dirty.

At a certain point, Piersante told me, a line of the spreadsheet waved to get noticed: it was an “empty link” from a page of the French Senate, which is a legislative study about energy policies, and which points to the domain of an Italian tariffs comparator (you can still find the link in line 402 of the page’s HTML code):

A non-institutional link to a commercial player, the only link in the body of the document, without anchor text and without an apparent reason given the content of the page.

As Piersante commented to me, the “empty links” are often interesting, because at times they are scars of things that happened in the past, of alterations of the text.

The classic case is that of WYSIWYG HTML editors. You put a link

with a WYSIWYG editor, then you decide for some reason to remove it, and what you have selected to delete is not all the link, but only the anchor text.

Result? It remains an “empty link”. In WordPress, it happens often.

However, questions remained: Who had placed the link? Why had he then removed it? Did it have a sense that Piersante couldn’t see?

Second act: there is an aggressive network

Piersante decided to investigate out of simple curiosity and, with the help of some tools, he discovers the existence of a network consisting of at least 7 domains headed by Selectra.net:

These sites are the Italian branches of a French company that operates internationally, extremely aggressive as regards SEO activities, especially on off-site factors.

Piersante examined the links coming to the network and his jaw fell: many hundreds of sites of Italian local authorities generate swarms of links all the same that land on the network.

And it’s not the only pattern, there are several.

He, therefore, decided to map the phenomenon well and investigate.

From a strictly SEO point of view, these are very heavy links, coming from institutional websites, from “still” and stable pages over time. “PageRank nuggets”, as Piersante defined them.

In short, they have a huge value in terms of thrust, how did they manage it?

The mapping shows the magnitude of the phenomenon, with some precise characteristics

Try this query in Google: 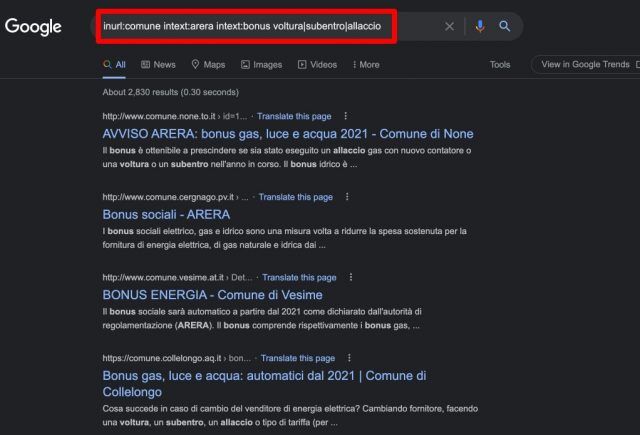 The question remained: how the hell did Selectra manage to get those texts published in such a massive way, in such a “difficult” environment, and in such a relatively fast time?

We are talking about sites of small municipalities, normally managed in spare time by employees or volunteers, and where the reactivity is not at the highest levels.

How did they do it then?

At this point, Piersante tells me how he laid out various hypotheses and started various lines of investigation, which, however, did not lead to anything concrete once subjected to Occam’s razor.

However, somewhere he was convinced there must be a simple explanation for this sensational fact: a French network has put the set of Italian municipalities to SEO value with a certain method, having been successful at least in one case out of 10: a lot, too much, out of range.

To tell the truth, the networks discovered are two – continued Piersante – and both French. There is also Papernest with Prontobolletta.it and other sites.

The activities of the latter network are minor but there is a further strange fact: in certain texts published by some municipalities, there are links to both networks, both in Selectra and Papernest.

When you don’t know what to do, segment and rank, says the motto.

During the segmentation, Piersante found the answer to the question: “But how the hell did they do it?”.

In examining the backlinks, it had already emerged previously, thanks to the code left by the webmail clients, that many municipal officials, who inserted those articles, copied and pasted them directly from the text in the emails, not from attachments.

And it is exactly during a hasty copy/paste that the definitive trace, the smoking gun, is left on this page: 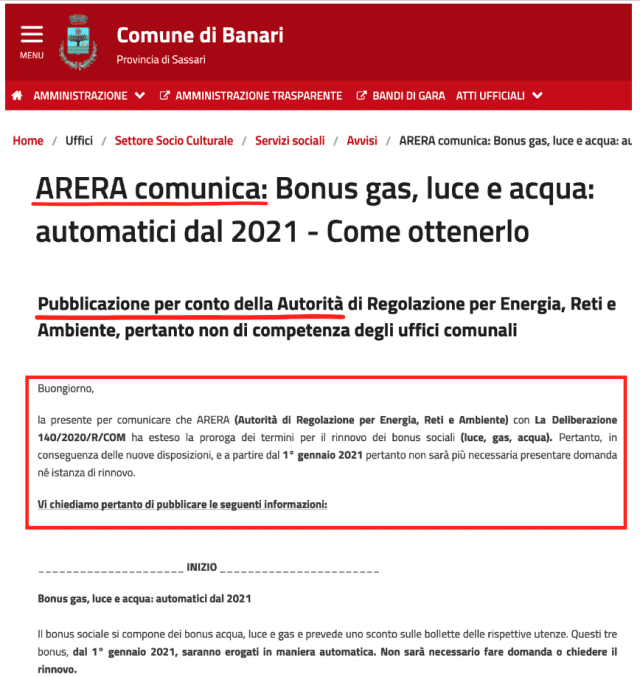 The highlighted text says this:

this is to communicate ARERA (Authority for Energy, Networks, and Environment) with Resolution 130/2020 / R / COM has extended the extension of the terms for the renewal of social bonuses (electricity, gas, water).

Therefore, because of the new provisions, and starting from 1 January 2021 it will no longer be necessary to submit an application or request for renewal. We, therefore, ask you to publish the following information: “.

The answer was there, simple and crystal clear. It explains everything. They pretend to be ARERA.

This is why the mayors sign the communication and why it is massively published by the municipalities: they are convinced that they are dealing with ARERA, the regulatory body.

The trick is pretty trivial. A real ARERA communication is taken, authentic and useful content for users, and the links to the Selectra network are subtly injected inside it. The press release is then sent to the municipalities with a bureaucratically peremptory call for publication. Bingo!

Piersante showed the page to a colleague, who pointed out an important thing that had escaped him: The “Bonus PC” theme.

At the end of almost all ARERA-fake press releases, a final paragraph is inserted with the label “Important:” which deals with the theme of “Bonus Pc”, completely unrelated to the activities of ARERA (remember that ARERA is a body for water, gas, and electricity).

A fake in the fake, put up solely to have the pretext of gambling the link with the anchor text “Offerte Internet” (“internet deals”): 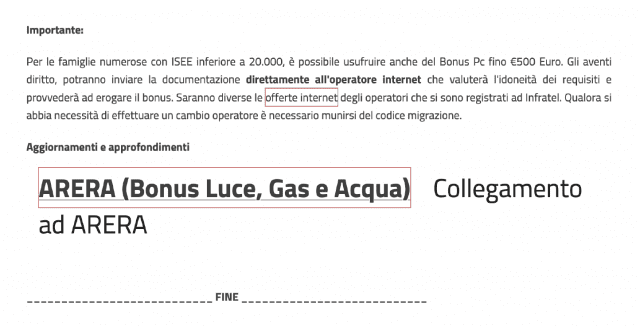 Piersante mapped the municipalities that contain the fake squared ARERA + Bonus Pc, now there are about 360.

This seems to be the format that has been most successful.

Act five: does the trick work?

It works great. The last two Google Core Updates have rewarded the sites of the Selectra network in a very important way:

It is inevitable: if many hundreds of institutional sites from different IPs link to you and link only to you and not your competitors, it is safe to assume that you have something special. This is how algorithms think.

The “tactic” of deceiving the municipalities is not the only one used; there are others that at first glance show the same lack of scruples and a similar distance from Google’s guidelines.

In other words: the authors of this “campaign” seem to suffer from a sort of PageRank bulimia, they always open the gas to the maximum and the rules do not care, as if they thought that no one will ever notice.

Instead, as Piersante demonstrated, everything happens before the eyes of all the operators in the sector. If they keep them open.

Towards the end of our chat, Piersante could not help but launched himself into a vehement invective:

“This has been going on for years, is it possible that no one out there has noticed?” – Piersante asked sarcastically – “Have Machine Learning algorithms made humans blind? But above all, how is it possible that a similar way of being online was even conceived in a structured company with solid international foundations? How did this slimy SEO idea, the “French Link”, lead to vandalizing hundreds of Italian public sites for all to see for marketing reasons? Did someone decide it? Did it work its way up gradually? For trial and error? Certainly, from a certain point on the “French Link” industrialized on a large scale.”

And he finalized his invective:

“Does it not occur to them that, if discovered, this way of acting can represent a serious reputational catastrophe for the creators/authors/associated brands? Which hubris in bubonic form possesses them to think that a scam of this magnitude, involving so many people leaving so many traces, will not come to the surface?”

But one sentence, above all, struck me for its truth: “The evil that SEOs do lives after them, the good is often buried with their bones.”

On the other hand, I cannot but think how Google itself is still not able to individuate these kinds of patterns.

Google probably gives a vote of confidence to institutional websites and fails to consider that frauds like these can be put into practice precisely to obtain heavy links from supposedly trustworthy websites.

Perhaps, Google should start considering these sites like everyone else, a bit like years ago it started paying attention to scholarship links from .Edu websites.

On June 16, the ANCI (National Association of Italian Municipalities), having been warned of the ARERA case, took a rather clear public position, also going into the details of the techniques used by Selectra: 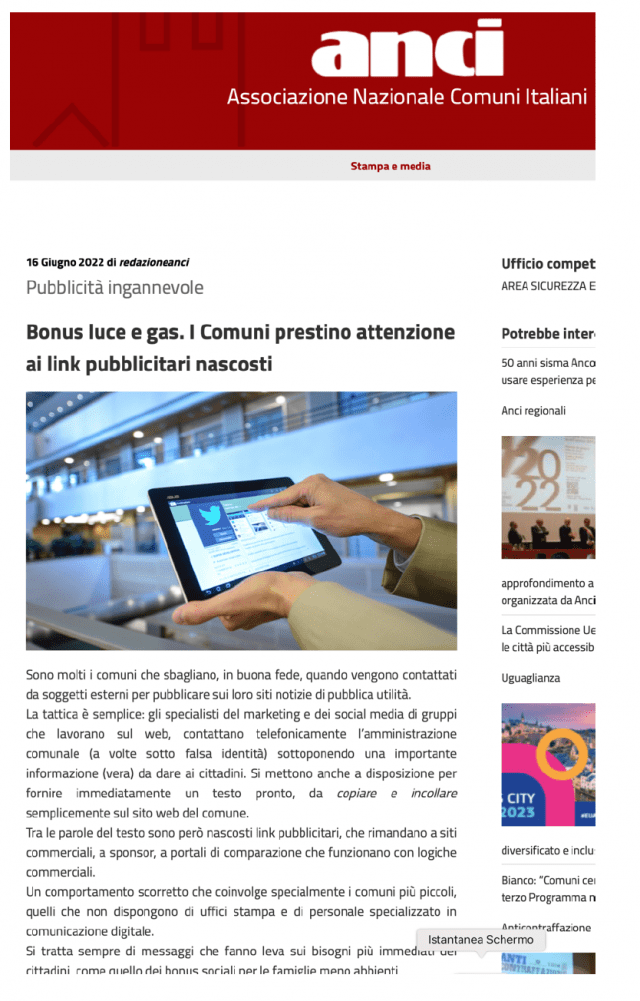 However, the backlinks are still live on many municipalities’ websites, so it is Google the actor that should enter the stage, and start deeply analyzing the real nature of the backlinks .gov and institutional websites publish.

Today 6th of July 2022, the co-founder of Selectra Italia contacted me publicly both on Twitter and Linkedin, and it is correct for me to present you his justifications and judge them.

In any case, as Julius Caesar said once: “Caesar’s wife must not only be honest but also seem so”.

In other words, in the SEO world, as in every aspect of life, some kinds of mistakes – even if they had been committed unintentionally, can not have consequences.