What social influence is and tools to measure it

It seems years ago, but Search Engines has recognized the importance of the Social Signals as ranking factors less than one year ago. And that announcement has to be considered a milestone in the history of Search, officially opening what we could define as the birth of Social SEO (or SEOcial as we say in Spain).

Because of this I believe that us SEOs need to understand the theory behind Social Media, and not just limit ourselves in becoming social media tools experts.

When it comes to Social Media as a marketing tactic, what really matters in most cases is to interpret the users action in an online context with the people who they are socially connected to and how they influence each other. Undoubtedly, the social influence in its purest essence is what leads us to use this type of services that most of our friends are already using; we succumb to that social pressure and move our interactions online.

In this sense, the influence our friends have on us (and vice versa), is amplified to a new horizons of contacts. The influence our environment has on us, for instance, leads us to buy a product because one of our friends recently purchased a product. Moved to the online life, the influence would lead us to consider the recommendations on a particular brand, campaign, product, service, etc., our contacts/friends or those people who we believe are experts do.

The influence that certain people have on us in our digital life, push us also in shaping a certain circle of friends, circle based on common affinities. In this sense, to identify the situations in which the social influence is the cause of this correlation is crucial. The social influence determines that an idea, a behavior or a product are virally disseminated through the social networks.

The key is to not underestimate the power of the social nature of the human being in favor of the social network platforms themselves. In its broadest sense, as stated by Nicholas A. Christiakis and James H. Fowler in their book Connected: The Surprising Power of Our Social Networks and How They Shape Our Lives: Social networks spread happiness, generosity and love. They are always there, exerting a subtle influence while determining our choices, actions, thoughts and feelings. And our desires too. Moreover, these connections do not end up in the people we know. Beyond our social horizons, friends of friends of our friends can promote chain reactions that ultimately reach, like waves, coming from foreign lands, and break into our beaches.

Here I share a Ted Talk by Nicholas Christakis to better understand his vision of social networks:

Communities are defined by structural connections and not necessarily for any particular trait that can connect its members. Stated very simply, a social network is an organized group of people formed by two types of elements. However, the organization of natural social networks is not imposed from above. Social networks evolve organically from the natural tendency of everyone to establish relationships and make few or many friends, to have a large family or small… (again from “Connected…”) 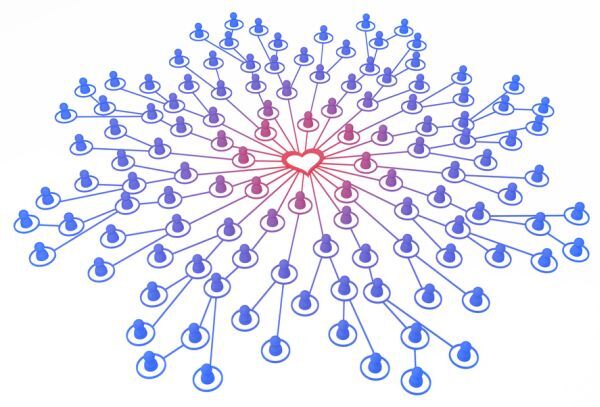 For the authors, the social networks have two aspects:

Thus, they identify some basic rules:

Thus it is obvious that the influence others have on us to act similarly, whether in fashion, in the adoption of a technology, in a viral marketing action, in a word of mouth sequence…

And few have expressed so clearly this series of concepts such as Malcolm Gladwell in his book The Tipping Point, which does an excellent analysis the nature of “social epidemics”. For him, the answer is that the success of a social epidemic depends greatly on the participation in a certain type of person, endowed with some special and unusual features.

Sometimes we place great emphasis on content and forget that what matters for its propagation is a number of elements and fundamental rules as: 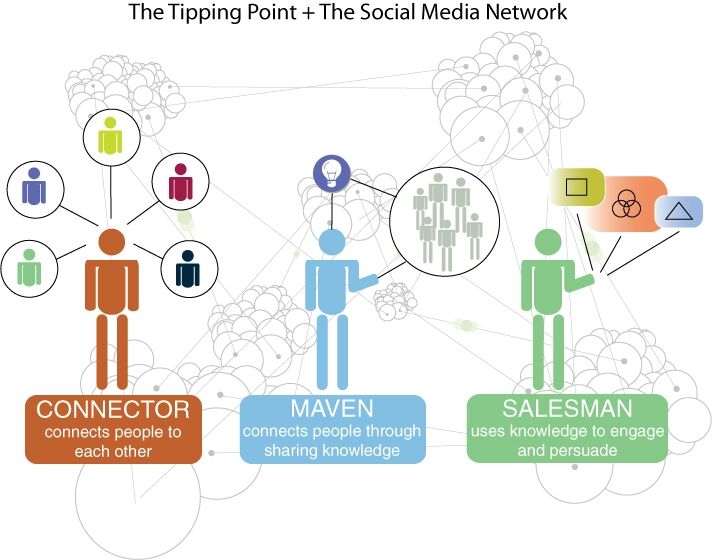 With that, we approach significantly to the factors we must take into account when measuring the influence of certain people in social networks, something strategic for our actions also as an SEO. Factors which go far beyond the number of followers on Twitter and Facebook.

As suggested by framework established to date, we should not worry so much about the number of followers but about those who are following us and how to take care of spreading our messages. In social networks, as in life in general, relationships and take care of them is everything.

Social media has revolutionized many things, but one of their greatest impact has been, without doubt, to enhance the influence and role certain people play over others. Through the process of democratization, the transition to the self-mass or our role as micro media, the role of authority of certain individuals has grown to a limit not previously considered . What is important is to try to understand how messages are filtered and transferred to several people and what role each one of them plays within the social network (not as service but understood in its sociological concept). We need, therefore, to understand the map of the influence aura.

To this I would add this other series of fundamental ideas:

In this scenario are emerging interesting specific tools that allow measuring the degree of influence of people on the social web. Of these, one is growing significantly above the rest: Klout ( with more than 100 million active accounts ), a service which originally was created to measure the influence of the Twitter accounts and has been adding platforms to integrate Facebook and YouTube, among others.

Following its steps other services have started to appear, which include various specific platforms or are specific to just one, and existing tools have evolved to measure and provide statistics to help put a value on our “Social Score”.

Some of them are: